Dogs at the Bonyhad Orthodox cemetery

SUGGESTION FOR VISITORS TO GRAVES IN THE BONYHAD ORTHODOX CEMETERY
It is recommended to call the caretaker Mr. Jo'zsef Va'l +36 30 513-9596 ahead of planned visits to the cemetery and agree on a date and approximate time. This way he has time to assure there are no dogs at or near the grave sites. He said that he understands some Yiddish and can "teuch".
BACKGROUND  AND STATUS
It became increasingly apparent that the 14 dogs by the Bonyhad Orthodox cemetery are a significant problem.
Some or many of the dogs were thrown into the cemetery area and tMr. Va'l who lives alone is taking care of them.
Many visitors to graves are very uncomfortable in presence of so many dogs and some are afraid.
A basic fence was constructed a few months ago separating the section of graves from the large area where Mr. Va'l resides. It was initiated by a dedicated non-Jewish woman in Bonyhad: Beata Hetesi. She also worked on some of the construction.
Shlomo Singer and I contributed toward the construction.
The fence was reinforced about 2 weeks ago to prevent the dogs from digging under it.
There are 2 gates on the fence.
If they are closed the fence seems to be able to perform its function.
Shlomo and I have been in frequent contact with the Jewish Community in Budapest (MAZSIHISZ) asking for their help to resolve the problem  of the dogs. They manage almost all Jewish cemeteries in Hungary and the 2 Bonyhad cemeteries are probably registered in their name. We were informed that they are unable to help due to financial and other constraints. They did make a financial contribution toward construction of the fence.
We also contacted the mayor and also the notary of Bonyad and received their response last week..
They are well aware of the problem and contacted many animal shelters nearby, in the Tolna province and elsewhere in Hungary.
Beata Hetesi has also been trying to find places with no avail.
There are no available places for the dogs in the cemetery.
The municipality is determined to change this, but it is expected to take time until places become available by new construction or vacation of currently occupied places.
We are in contact with MAZSIHISZ and are hoping that they and  the Bonyhad authorities  will join forces withto increase the chance of timely success.
Shlomo and I are also looking into having the female dogs sterilized to prevent the problem from getting worse.
Sterilization is free, but the prerequisite is that the dogs have a chip installed under their skin and be inoculated which costs about $30 per dog.
So far we don't know if the municipality would pay for all or part of this.
We also asked the leader of a large Christian group in Bonyhad if their members would be interested in adopting dogs.
Should that be possible the magnitude of the problem would decrease.
.
Posted by Reuven Chaim Klein at 12:21 PM No comments:

There are many unleashed dogs in the space outside the area of the graves. The dogs made a lot of dirt in the cemetery and some visitors could not go to their family members' graves. Some were afraid of all the dogs running between their legs. A fence with a gate was erected around May-June 2022 to keep out the dogs. This was initiated by a few people in Bonyhád. The fence was partly financed by MAZSIHISZ: the Jewish Community in Budapest, which is responsible for the two cemeteries, the Bonyhád municipality and with a contribution by the Singer family.
Members of the Bonyhád Jewish Community under Shlomo Singer's leadership requested MAZSIHISZ and the Bonyhád municipality to assure that the dogs are removed from the cemetery. Seems that the MAZSIHISZ may not be able to help, but they instructed their worker, the caretaker, to find other places for the dogs. The Municipality will possibly make a decision shortly about handling the dog situation.
An email notice will be sent to members of the Community once the dogs are removed.
Meanwhile those who plan to visit the cemetery are advised to contact Mr. József Vál (+36 30 513-9596) in advance and request that the fence gate be closed and the dogs be locked up during their visit.
Posted by Reuven Chaim Klein at 12:51 PM No comments:

Volume 1 of Veyedaber Moshe is about Bonyhad and the Pollak rabbinic family.
It includes much valuable material, including many photos.
If someone is interested to purchase the book they should contact Rabbi Eliezer Pollak at a6370552@gmail.com
Shalom
Posted by Reuven Chaim Klein at 12:47 AM No comments:

Videos of the July 18 2022 Bonyhad Hazkara in Jerusalem

http://eproceeding.awardspace.info/bonyhad/HolocaustMemorialInJerusalem2022.html
Regretfully the beginning of Rabbi Eliezer Pollak's important and informative talk was missed due to an issue with the video camera
Posted by Reuven Chaim Klein at 1:30 AM No comments:

There was an unnoticed problem during conversion to PDF format.
Corrected version enclosed.
Posted by Reuven Chaim Klein at 1:12 PM No comments:

Rabbi Eliezer Pollak just published a 6 volume set VEYEDABER MOSHE about Jewish life in Bonyhad and  teachings of his grandfather who was Rabbi of Bonyhad:  Rabbi Moshe Pollak z"l. Many in the International Jewish Community of Bonyhad will likely be interested in the book, which may be ordered via email to Rabbi Eliezer Pollak (see below) and  also at the Hazkara. 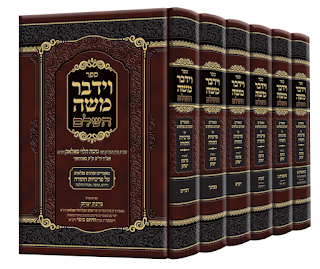 Posted by Reuven Chaim Klein at 3:49 AM No comments: